skip to main | skip to sidebar

Out with the Old, In with the New!

I had the opportunity to work with a very wise business mentor recently and we got talking about some of the older designs I currently have for sale.

She said if I wouldn't like to see them on a billboard, then they should go, I shouldn't have them up for sale.  And she's correct of course.  If I'm not loving them, if I'm not loving working on them or personalising them my clients, then no I shouldn't have them for sale.  I've been through and counted up 37 - yes! 37! designs that simply have to go.  Over the next little while I will be taking these designs down and replacing them with new and improved creations, more reflective of me and where I am now. 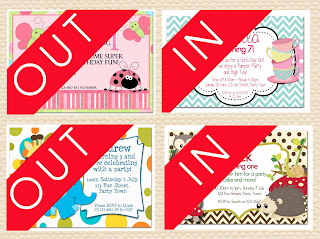 As a designer, I have grown over the years, my skills have improved and been refined, and some of my earlier work just doesn't show me at my best.

I have lots of ideas for my new designs.  However if there is a particular theme, idea or design you are just itching to see, please drop me a line.  I'm always interested in and appreciative of your feedback and ideas.  After all, it's you who purchase the designs!

Until next time, cheers nicky
Posted by Nik @ the Chic Party Boutique at 2:04 PM No comments:

It is surprising the amount of requests I receive from parents whose children's birthdays are quite close together and who want to throw one party instead of two.  It makes a lot of sense and I'm sure it works out costing less than two separate celebrations.  The difficult part is how to combine the parties so it looks even remotely cohesive.

In the past, I've been given the challenge of designing an invitation with a Space and a Princess theme.  Kinda tricky.  A simpler theme was Princess and Pirate, almost a walk in the park that one!  More recently, the two themes were a Mermaid and a Hedgehog.  Hmmmm, interesting.  How on earth do I approach that I wondered??!

In the end, the solution was relatively simple.  Two invitations.  I suggested to my client that we double side the invitations, have the Mermaid on one side and the Hedgehog on the other.  Obviously they would need to work together somehow, so I elected to keep a similar look to each design.  This is what I came up with.


My client was very happy, her kids were thrilled, both got what they wanted.  Great result all round. 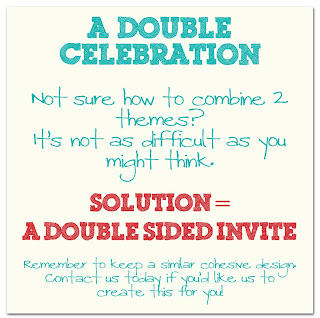 Something to keep in mind should you decide to double the fun and throw a combined birthday party for your next celebration!

Until next time!
Cheers, Nicky :)

Posted by Nik @ the Chic Party Boutique at 11:59 AM No comments:

It's been a few months since my last post.  It's often hard to find the time to do all the social media that the experts say I should be doing.  And to be honest, I just don't think a lot of what I have to say is that interesting!  This one is though, well it is to me.  I hope you enjoy it too.

My kids had a bake sale at school this week as a fundraiser for something or other.  I was slightly more organised than normal and it helped immensely that they actually handed me their notices on the Monday after school rather than the Wednesday morning (the day of the bake sale) which is normally the case.

I tried to think of something relatively quick and easy that would also appeal to the masses.  And a lightbulb went off in my head, Vicky's Fudge Cake.  Yum!  I love that recipe.  I used to make it as a child, and it got me thinking.

Vicky was my mum's best friend.  Vicky, her husband and children lived across the road from us for many years when my sisters and I were quite small.  They were always together.  They moved away one day, not that far away but far enough that we didn't see them that often.  I do recall one visit though, I was bouncing on their trampoline and thought I was way clever.  Did a flip and landed on the metal edge (they weren't padded back in those days).  Put my front teeth through my bottom lip.  Mum had to take me home after that.

One day mum told us that Vicky was sick, she had a brain tumour.  It'd be ok though, the doctors were going to take it out.  I didn't know anyone else who had been sick like that before, but mum seemed sad.  I remember for such a long time after that every time we saw Vicky she was wearing the most amazing coloured scarves.  It seemed the operation and treatment made her lose her hair.  I was about 10 or 11 probably at the time and didn't really know what was going on.

Vicky's hair grew back, she had the most funky short hair cut, I thought she was so beautiful.

Then one day mum told us Vicky was sick again, very sick.  The tumour was back and this time she wasn't going to get better.  My mum was so sad.  Vicky passed away not long after that.

Mum has told us some funny stories about what they used to get up to.  Like the times(!) they'd sit around all morning drinking coffee, kids playing and then my dad would call to say he was coming home for lunch.  They'd race around cleaning the house in super quick time and then Vicky and her kids would nip back to their house before dad got home.  That one always makes me laugh.

Every time I make this fudge cake I think of Vicky.  So I told my kids about her the other day as I was making the fudge cake.  Kind of seemed right they knew where the recipe came from.

Vicky was a very cool lady, and very beautiful.  I know my mum still misses her friend.

I wanted the share the recipe with you.  Enjoy your long weekend and if you're travelling, please travel safely.

Melt together, remove from heat, add biscuits.  Mix, press into tin and ice.

I always double the recipe, one lot is never enough!
Posted by Nik @ the Chic Party Boutique at 3:31 PM No comments:

Often we spend a fair amount of time deciding on the perfect theme for our special celebrations and obviously a lot of thought and preparation also goes into what food will be served.  And all too often, the decorations get overlooked which is a real shame as they set the scene and finish the look of your party space.

Honeycomb Tissue Balls are a wonderful way of decorating your party space.  They are simple to put together and are available in a variety of colours both locally and overseas.  If you were to hang a bunch of them above the finished party table, your display would look complete, colourful and balanced.

A selection of Honeycomb Tissue Balls are available locally from Lilybel Studio which you can find here:
Lilybel Studio

Nicky x
Posted by Nik @ the Chic Party Boutique at 1:14 PM No comments:

My daughter Emily turned 8 recently and I used the opportunity to create a party table to co-ordinate with her invites. I had an idea in my head of what I wanted to achieve and surprisingly enough, I pulled it off! To be honest, it was easier than I expected and I feel it's something that anyone can achieve. It did take some time though and it is something you'll need to plan. I started by drawing a plan of how I wanted the table to look and what food I planned to place on it. From there, I worked out what tags, labels and wrappers I needed and then set about designing them.

Of course if you are planning a party, all you need to do is let me know what your ideas are and I can design the invites and help you plan what else you'll need for the table.

Surprisingly enough too, it didn't break the bank. I think because I did take time to plan and had worked out what food was going to be served, I had time to purchase a good amount in advance and not all in a mad rush at once a couple of days before the big event - which is what I normally do!

I had the cupcakes professionally made because I wanted to achieve a certain look and because I just didn't want the hassle of having to do those too. They were fab as well, better than I could have imagined! Sondra at Sweet Bites Cakes made those for the big event. I sent her a copy of Emily's invite and she took care of the rest. I highly recommend Sondra and you can find her at www.sweetbitescakes.co.nz.

I will admit I did go a bit OTT and purchased pink and white polka dot balloons, the paper straws and the pink and white polka dot party bags from the US. They really did look the part though and I'm so pleased I did that. Those type of products are something I can easily source on your behalf so if you're looking for products such as these, please let me know and I can get pricing for you.

The tissue pom poms sitting on the table are something my girls and I made shortly before the party and I have to say it didn't take much more than half an hour to complete those. I found the instructions on the internet. I'll dig them out for you and post them later.

The VERY best thing though was the reactions of the kids and parents. Emily was so happy she screamed! When her guests arrrived at the door, she excitedly brought them through to view the party table. For a few moments, the gifts were forgotten as they stood in front of the table in awe. There were lots of gasps and wows and looks of wonderment. I was really chuffed and it made the effort so worthwhile.

So next time you've got a party to plan, whether it be a big or small affair, a birthday, baby shower, engagement, christening or whatever, take some time to think about the table and what look you would like to achieve. Your next email after that should be to me so I can help turn that idea into a reality!

Below are some photos from Emily's party. Hopefully you'll get some inspiration from them for your next event! 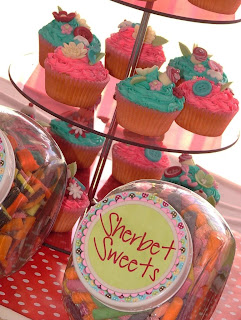 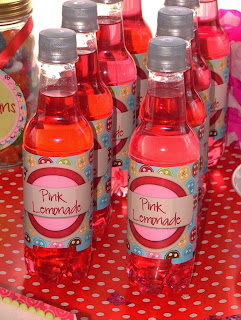 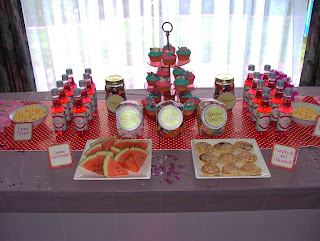 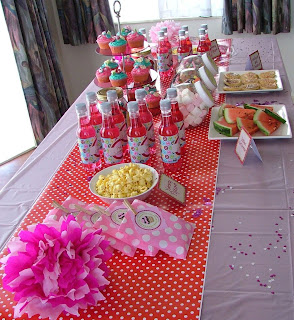 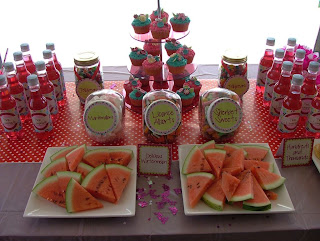 Posted by Nik @ the Chic Party Boutique at 2:31 PM No comments:

Gosh it really has been a long while since I posted anything on here! It seems an update is well and truly overdue.

Design work has taken most of my time of late. It's great in some ways because I do end up creating lots of fabulous new designs however it does also mean there is far less time for blogging, Facebooking and newsletters. I feel like my new creations are the best kept secret around at the moment *smiles*.

Here are a couple of new designs! 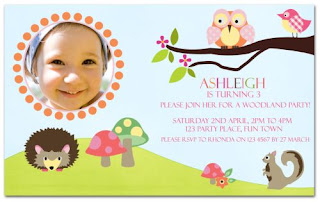 This design is called Woodland. Simple and cute all at the same time. 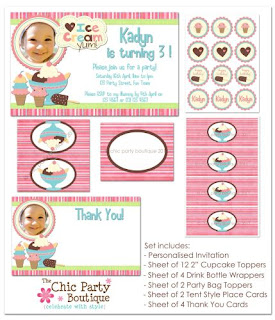 And this is the first set of designs from my new Party Sets range. Each set features an invite, thank you card, cupcake toppers, drink bottle wrappers, party bag toppers and tent style cards.

It's a great option if you are planning a party and don't quite know where to begin or what you might need.

A blank canvas to this!

This started out as a blank canvas and look what it turned into! Inspired by JM Designs, I really love how this turned out!

Posted by Nik @ the Chic Party Boutique at 1:43 PM No comments: